“Deepen into social segregation of secondary schools in the Community of Madrid”, the new article by Murillo and Martínez-Garrido now available in RASE. 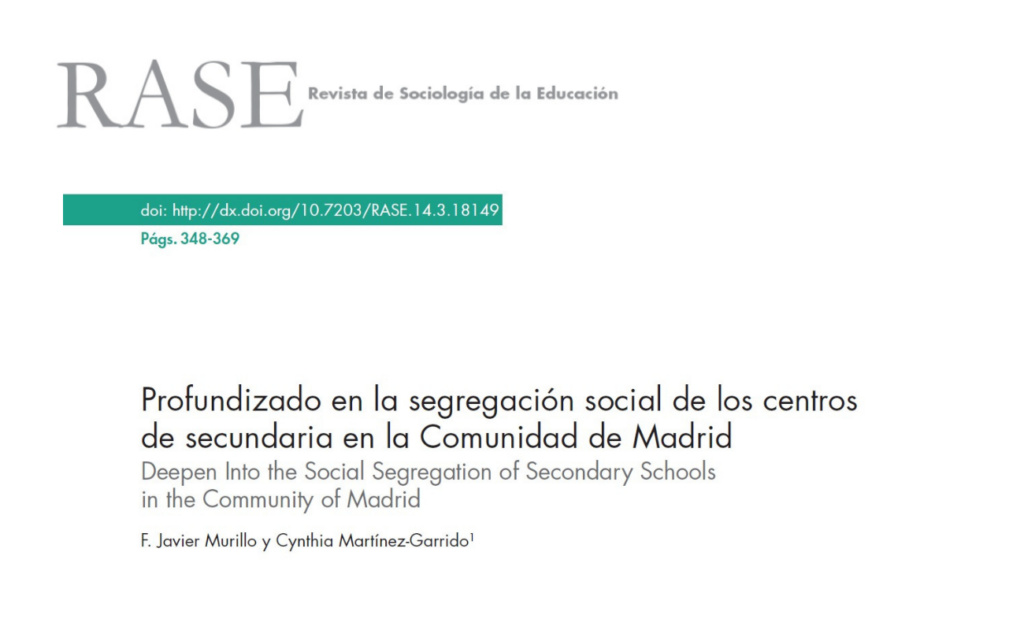 School segregation is one of the most important indicators of the (poor) quality of the educational system of a territory and one of the main obstacles in guaranteeing the right of all boys and girls to receive an equitable, inclusive and quality education as recognized in the Universal Declaration of Human Rights, the Convention on the Rights of the Child and Sustainable Development Goal 4.

Taking into account the above and using data from the 2018 edition of PISA, the research by F. Javier Murillo and Cynthia Martinez-Garrido provides us with detailed information on the magnitude of school segregation by socioeconomic level in the Community of Madrid and the direct impact that private schools and the bilingualism program have on it. This study has a sample of 5,015 15-year-old students enrolled in 143 schools located in the Community of Madrid, of which 52.58% are enrolled in public schools, 36.30% in subsidized private schools and 11.13% in non-subsidized private schools.

After measuring the magnitude of school segregation using five different index the authors conclude that the community of Madrid registers the highest level of school segregation for socioeconomic reasons in Spain – 0.3092 – with large differences with the other communities, an alarming result. Secondly, the analysis shows that private schools and bilingualism have a significant impact on school segregation by socioeconomic level of secondary school students in Spain, which urges governments and political decision-makers to initiate measures to put an end to this phenomenon.  Finally, it is important to point out two potential limitations of the research that the authors themselves recognize.

The virtue of this study is that thanks to the introduction of the differentiation of the ownership of the schools (public, private subsidized and private non-subsidized) and their participation in the bilingual program, it becomes the pioneer research on this topic. In addition, the detailed explanation of the method used in the study, the selection of variables and the timely citation of verifiable sources make it an interesting, clear and reliable research.

PrevF. Javier Murillo and Nina Hidalgo publish a new entry in the Aula Magna Blog entitled “A look at the objectives in educational research articles”
F. J. Murillo will participate in the 1st Virtual International Congress of Education that will be held on 21th, 22th and 23th of October 2021Next