Carmen Madorrán, Manuela Mesa and Luisa Martín Rojo are present at the event “It’s time to take the climate emergency seriously” and reaffirm the commitment of the UNESCO Chair on Education for Social Justice of the UAM with the climate crisis. 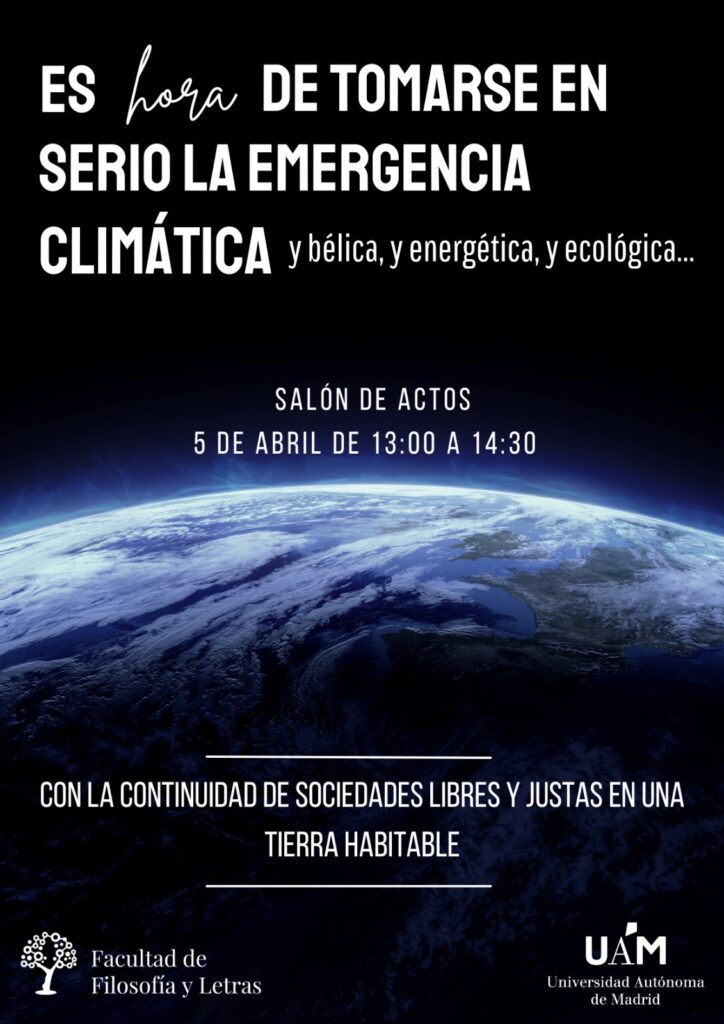 On April 5, the event “It’s time to take the climate emergency seriously” took place at the Autonomous University of Madrid. The event, organized by the Faculty of Philosophy and Letters, was attended by Carmen Madorrán, Manuela Mesa and Luisa Martín Rojo, all members of the UNESCO Chair.

The event, held shortly after the publication of the new report of the UN Intergovernmental Panel on Climate Change (IPCC), sought to bring to light the importance and urgency of taking measures to address the climate situation, since we are on the verge of a climate breakdown.

Among the interventions that took place during the day, it was highlighted how the climate crisis, the decrease in ice sheets, the rise in sea level, water scarcity, etc., represent serious threats to world peace. In addition, as noted, we cannot forget that these changes are affected by gender inequalities, and women are the ones that suffer the most. Women make up the majority of the world’s poorest population and are also the most dependent on natural resources, which are threatened by the climate crisis.

The situation of forced migration due to climatic causes that thousands of people face was also discussed. It is increasingly clear that immigration is not just a problem of the countries of the global south, but is an issue of global responsibility. In this way, the speakers led us to think about different forms of recognition of the rights of immigrants to legally protect these people and ensure them a decent place where they can live, as well as the need for internationally binding texts aimed at alleviating this situation.

The importance of activism in the scientific world was also claimed. University education is increasingly specialized and it is necessary to generate interdisciplinary studies that provide a more global vision in the academic field and that can be converted into collective action.

Certainly there is a universal concern with the environmental guideline, but this concern has not translated into changes when we are going through a process of depletion of natural resources. In this sense, the exhibitors invited us to change the mentality that it is only possible to do something from above and start turning our indignation into mobility. Just as one of the speakers said, inspired by Gramsci “It is necessary to take sides and stop looking out the window, fighting indifference to climate change.”