Poverty and inequality, constraints on the path towards an inclusive education

Education is one of the fundamental pillars for building inclusive societies with greater equal opportunities. However, there are social, economic and cultural factors that can favor or undermine the achievement of equity and inclusion in education, as noted in the last UNESCO GEM Report. 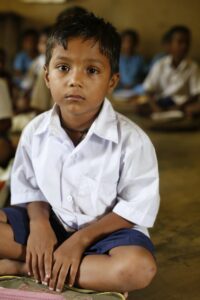 that limits the opportunities of children in poverty, many of whom cannot attend school, and those who do are disadvantaged compared to students who come from wealthy or higher-income households due to various factors such as malnutrition or lack of material resources to develop their learning.

In this regard, the aforementioned report indicates that in 30 low-and middle-income countries, 41% of children under the age of five belonging to the poorest 20% of households were malnourished.

It also reveals that approximately 258 million children, adolescents and young people, that is, 17% of the total, do not go to school. Furthermore, it indicates that there are considerable disparities in attendance rates based on socioeconomic status. In 65 low- and middle-income countries, the average difference in attendance rates between the poorest 20% and the richest 20% of households was 9 points for boys and girls of primary school age, 13 for adolescents of lower secondary school age, and 27 for young people of upper secondary school age.

Consequently, it is observed that poverty affects attendance, school completion and learning opportunities. Across all regions except Europe and North America, for every 100 adolescents in the richest 20% of households, 87 of the poorest 20% attended lower secondary school and only 37 completed it. Of the latter, for every 100 adolescents from the richest 20% of households, about 50 reached a minimum level of proficiency in reading and mathematics.

Thus, the report recommends focusing on those who have been left behind: inclusion does not exist when millions of people do not have access to education. Finally, we must not forget that we can only talk about equal opportunities when all children, adolescents and young people in the world have the same educational possibilities, regardless of their social or cultural origin, or their economic condition. We can only advance towards an inclusive society if we break down the barriers that divide people into rich and poor from the beginning of their lives.