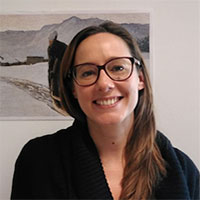 PhD student in Anthropology from the Autonomous University of Madrid, she is a member of the DEMOSPAZ-UAM Institute for Human Rights, Democracy, Culture of Peace and non-violence and the UNESCO Chair on Education for Social Justice.

She currently works as a predoctoral and technical researcher of projects at the DEMOSPAZ-UAM Institute. She is coordinator of the internship program of the DEMOSPAZ Institute and researcher of the research program «Human Rights and the Culture of Peace within the framework of the 2030 Agenda» of the Institute.

Since 2017, she collaborates with the Culture of Peace Foundation and with the CEIPAZ Center for Research and Education for Peace in the coordination of workshops, meetings, short courses and projects, including the workshops «Promoting just, peaceful and inclusive societies: SDG 16 and its implementation ”(2017) and the UNESCO Chairs Seminar“ Human Rights and Culture of Peace on the 70th Anniversary ”(2018).

She has collaborated with the Spanish Association for Peace Research in the organization of workshops on coexistence and peace in cities (2017) and in the compilation of documentation for the preparation of the report of the two editions of the World Forum on Urban Violence and Education for Peace, held in Madrid (2017 and 2018).

Between 2014 and 2018 she has collaborated on time with the Regional Center of the United Nations Development Program (UNDP) for Latin America and the Caribbean in Panama, carrying out consultancies related to assistance to the South-South Cooperation Project «Initiative for Risk Management in the Caribbean ”(CRMI II), the preparation of project proposals on Disaster Risk Reduction and Disaster Preparedness in the Caribbean, presented in DIPECHO calls (Disaster Preparedness Program of the European Union), and the preparation of Didactic training material on Disaster Risk Reduction and Preparedness for community representatives from small Caribbean islands.

Since 2007 her research area is the anthropology of risk and disasters. Between 2007 and 2008 she has worked on atomic tourism in the Chernobyl exclusion zone in Ukraine. She is currently doing her doctoral thesis on local representations of the Lorca earthquake.

Her lines of research include: anthropology of risk and disasters, resilience and sustainable development, violence and peace building in cities, Culture of Peace and non-violence, Human Rights.