May 1. International Workers' Day 2020. A day to recognize and claim those fundamental and essential sectors made invisible in a context of crisis

Understanding the scenario under which historically significant changes are born, forces us to stop for a second the march and observe that what seems to us evident and indisputable today – 8-hour workday, prohibition of child labor, annual paid vacations – in another era was considered utopian, exaggerated or inappropriate. The commemoration of International Workers’ Day constitutes one of those necessary instances of reflection that year after year shifts its gaze to what it was and what it is today. 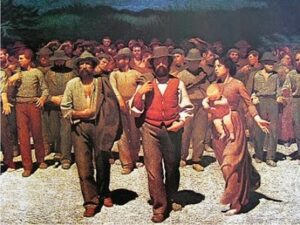 International Workers’ Day is celebrated in many countries in honor of those who fought for a decent life for all workers. It has its origin in 1886 at the dawn of the Industrial Revolution in the United States. In those years, the only limit that existed was that of not making a person work more than 18 hours without a just cause and the consequence was a fine of $ 25. In Chicago, the mainstream union began a strike from May 1, 1886, where the clashes between the police and the workers were especially hard and bloody. After days of strike, on May 4 a concentration was called with increasing tension in which there were many detainees, of whom five were sentenced to hang: three journalists, a typographer and a carpenter. They are known as “the Chicago martyrs”. From then on, it became a day demanding the rights of workers in a general sense that is celebrated to a greater or lesser extent throughout the world.

In recent years, the right to work and its related rights have suffered a substantial and accelerated degradation. Since the end of the 2008 economic crisis, the destruction of the type of permanent, full-time employment, with full social security coverage and wages capable of decoupling the worker from poverty, has reverted to another model based on precariousness. and imposed and accepted under the unbearable pressure of unemployment.

Today more than ever, in the midst of the global crisis in which we find ourselves, this degradation is visible on a large scale with workers who have lost their jobs overnight and without the right to access a decent benefit with the one to be able to survive in times of crisis. It is necessary to rethink and rebuild the work model if we want to achieve socially just societies, far from inequality.