Within the framework of the Sustainable Development Goals of the United Nations 2030 Agenda, the International Women’s Day is an opportunity to reflect on the progress made and to be achieved, as well as to recognise the key role that women have played in the history. Gender equality has not yet been achieved in any nation on the planet. Currently the UN highlights that less than 25% of parliamentarians were women in 2019 and one in three women continues to suffer gender violence.

Unlike previous years, a general strike has not 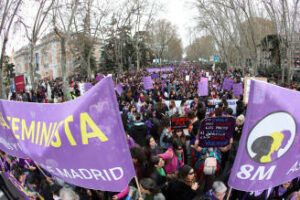 been called in Spain. However, there has been calls for mobilisations in all cities of the country under the slogan “Feminist revolt. With rights, without barriers, feminists without borders.” In addition, a large multitude of feminist organisations have organised and developed activities and mobilisations prior to International Women’s Day, from student societies to universities such as the Autonomous University of Madrid. Specifically, the Chair on Education for Social Justice joined the march of March 8 in Madrid.

The claims to demand effective and real equality have focused on four axes: violence, borders, bodies and the economy. These four axes articulate demands such as an affective-sexual education for the whole society, the guarantee of the rights of migrant and racialized women through the repeal of the immigration law. Also the withdrawal of the abortion of the Criminal Code, the de-colonization and access to assisted reproduction of trans persons or the responsibility of the State in care, as well as the ratification of Article 189 of the ILO Convention that affects domestic workers. To learn more about the Madrid call you can read the Manifesto of the Feminist Commission March 8 Madrid.