Madrid hosts from 2 to 13 December, the Conference of the United Nations Framework Convention on Climate Change (COP25). The UNESCO Chair in Education for Social Justice, from its line of action “Art and Participation”, joins Spain’s commitment to assume a leadership role in the face of the climate challenge, which is one of the greatest threats to prosperity and sustainable development of the planet.

Students of artistic education reflect on the consequences of generating waste and do so by modifying famous paintings with the help of editing programs for the transformation of images. They fill idyllic landscapes with plastic waste, garbage, chimneys that emit smoke and polluting gases.

Both in the exhibition “Art Pollution” that can be visited throughout the month of December in the ARTEspacios located in the halls of the Faculty Training School of the Autonomous University of Madrid, as in the virtual exhibition, hosted in this URL, We can find a forest painted by Frida Kalho full of piles of garbage. Also the water and food of “The Last Supper” by Leonardo da Vinci served in plastic cups, plates and bottles; St. Mark’s Square in Venice, saturated by parked cars and characters from Grant Wood, Sofonisba Anguissola and Murillo’s paintings wearing masks to survive the pollution that invades the paintings where they are portrayed.

The idea of this artistic action will occur to the artist and drawing teacher Carlos Cuenllas, when an image similarly worked on the internet is found. To edit the images on mobile, he recommended to his students of Education, Plastic and Visual, to use free editing programs such as Pixlr, Pics Art and Pixlr edition, among others.

Some of the paintings artistically intervened by the students of the artistic teachings of the Marista San José school (León) are “Self-portrait” by Frida Kalho, “El grito” by Munch, “Las meninas” by Velázquez, “Woman at the window” by Dalí, “The starry night” by Van Gogh, “The young woman with the pearl” by Vermeer, “La Gioconda” by Leonardo da Vinci and “Freedom leading the people” of Delacroix, among others. 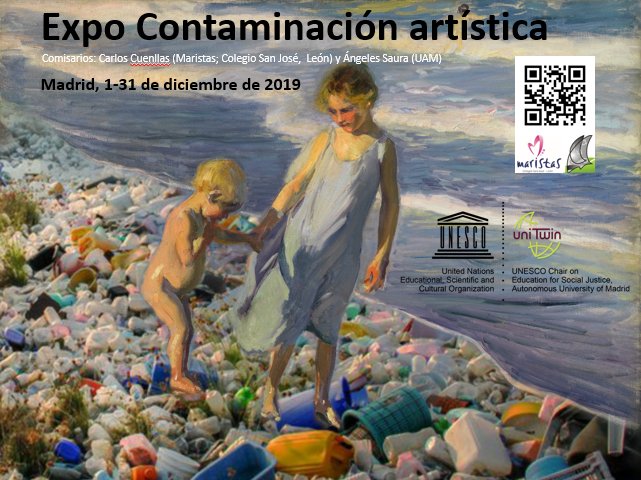 When editing the photographs, it has been attempted that any spectator differentiate without much effort what has been added to the painting, following the pattern currently used in most of the restorations. It has not been difficult, since many of the images added are anachronistic, since they did not exist at the time when the painting was painted. Colors have also been used with the same effect, using more saturated colors for inserted objects; although on some occasions, the opposite has been done. Black and white areas have been added, much more desaturated than the original part of the painting, in order to accentuate the sensation of environmental and visual pollution.

It is a service-learning project, developed in collaboration with the Autonomous University of Madrid, in which students learn to edit images, performing an exercise in visual communication. They also investigate about paintings from all eras and artistic styles. On the other hand, through the publication on the Internet and the dissemination in social networks with the hangstag # ContaminationArtística, it has been achieved that these images leave the school, be made public and fulfill the second objective of the project, which is to raise awareness to the whole world about the environmental issue. Teenagers committed to the sustainability of the planet, assume the role of defenders of Social Justice using ART.