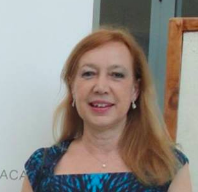 Lecturer of the Dep.de Physical Education, Sports and Human Motricity of the Faculty of Teacher Training and Education since 2000. Member of the Postgraduate Commission of his Department. Director of the Center for Olympic Studies of the UAM created from her initiative in 2005. In her structure she has promoted the “Clean Play Committee” in 2019 whose objective is to promote and disseminate, the value of sport as an individual educational resource and social, put “at the service of the harmonious development of people” in order to “favor the establishment of a peaceful society and committed to the maintenance of human dignity.” (Olympic Letter). In the UAM CEO, she has created the “Conrado Durántez” awards for “The Olympic Values”, which are awarded to two students of the CCAFyD Degree of the promotion that graduates every year. By a vote of the promotion partners they recognize a trajectory in the UAM demonstrated the greatest Olympic spirit: “a lifestyle based on the joy of the effort, the educational value of the good example, social responsibility and respect for universal fundamental ethical principles “To which the” Olympic Charter “refers.

Research Member in “Special Educational Needs: A multimedia guide as a teaching resource”. Innovation and teacher improvement project funded by the UAM. Year 2003.

Research member in “The evaluation of motor skills, formation of concepts and values and attitudes in schoolchildren and their impact on the development of social and educational programs” National R&D Plan. Years 2002-2005. Ministry of Science and Technology.

Principal research member of the research-director trio of “Memory and Dreams: Spanish in Colombia in the 20th century” Faculty of Social and Human Sciences of the Externado University of Colombia and the Spanish Foundation in Colombia. Bogota Colombia)”. 2003-2004 year.

Member of the Research Team of “Quality of teaching in Physical Education and attitudes of students towards learning and practicing sports activities: the case of the Community of Madrid” 2002. Ministry of Education. Madrid’s community.

Member of the Research Team of: “The evaluation of motor skills, lifestyles and values of the school population and its repercussions in the elaboration of social and educational programs in Argentina, Brazil and Spain”. 4th Call for Research Projects for cooperation with Latin America 2006-2007.Banco Santander

Research member of the Project «The process of teaching communication in Physical Education and its influence on the adoption of physical-sport activity habits and healthy lifestyles among the school population» National R&D Plan 2004-2007. 2007-2010.

She has two research six-year accredited.