In 2002, the International Labour Organization (ILO) proclaims the 12 of June the World Day Against Child Labour. This day is established to raise social awareness and denounce child exploitation which obliges the youngest ones to work, denying them their right to receive an education, health, and a fulfilling life which allows their development and overall wellbeing. 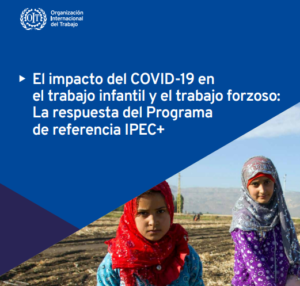 This year, the central topic has been the dangerous impact of Covid-19 in child labour. The social, economic and sanitary crises have left a trace on people’s lives, baing children the most vulnerable and damaged ones. The absence of adequate social protection systems exacerbates families’ vulnerability, and consequently, their children’s’ one too.

Child labour is still a global reality affecting 152 million children. This phenomenon perpetuates the inequality cycle preventing children to acquire the necessary education that will help them to achieve a better future. It is important to highlight that young girls are particularly vulnerable. According to the data presented in ILO “Global Estimates of Child Labour: Results and Trends, 2012-2016”, it is estimated that girls are more present in less visible forms of child labour, such as nursing. Moreover, participation in domestic chores is also assumed by girls. Therefore, girls’ workload is double, as they are occupied in economic production as well as in the household chores.

There is no doubt, fighting against child labour requires solid alliances, globally and locally. In this fight, education has a major role. As the Indian activist and Nobel Peace Prize Kailash Satyarthi stated, “Elimination of child labour and access to education are like two sides of one coin. One cannot be achieved without the other”.