In Tihuanacu (Peru) in 1983 the “Second Meeting of Organizations and Movements of America” was held. During the Meeting, it was decided to commemorate all indigenous women both for their courage and for the work they carry out in favor of the conservation and strengthening of the indigenous cultures, knowledge, customs and languages. For this reason, it is agreed to celebrate the International Day of Indigenous Women on the birth of Bartolina Sisa, a descendant of the Aymara lineage “Mama Tallas” (ancestral authority), who organized a rebellion against the Viceroyalty of Peru. 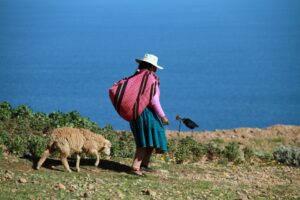 The indigenous woman contains the environment that she inhabits and accounts for the universe that carries her language, knowledge, culture and way of life. She is the keeper of the past of her ancients. Her hands sow the shoots of each lunar flash, without pettiness they take care of the teachings of the old women. With sweet words, they apply medicine to the community and with the strength of the earth, they weave the mighty rivers of America. So, she is that universe of wisdom and abundance that allows sprouts to treasure dreams and ancestral knowledge, in this way, they become the curator of the Indigenous Cultural Heritage and its habitat.