According to the latest report by Save the Children, rethinking affective-sexual education is an emergency in Spain

Providing young people with an affective-sexual education that takes into account sexual and gender equality and diversity is necessary for their development, otherwise, we run the risk that young people build their sexuality on stereotypical bases, violent and unequal. 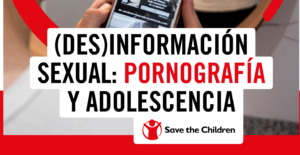 As stated in the latest Save the Children report entitled “Desinformación Sexual: Pornografía y Adolescencia”, the Spanish curriculum does not have a regulated active-sexual education, although it could be included in a transversal way with the future educational law (LOMLOE).

The report collects data from a survey undertaken by 1,680 students aged 13-17 who were asked how many hours of sex education they had received at their center in the last two years. 15.6% of those surveyed answered “none”, and more than 50% “between 1 and 4”. In light of these data, it is not surprising that adolescence continues to demand more information about sexuality.

In general, affective-sexual education is taught through short-term workshops and is aimed at adolescents, forgetting the importance of educating in sexuality from an early age.

In addition, the report highlights the need to reorient the perspective of these workshops. On the one hand, there is a lack of an active approach that contemplates the affective and emotional dimension of sexuality. Likewise, the lack of a focus on gender and feminist equality is another of the shortcomings of sexual education in our country. Thus, Save the Children urges us to address sexuality from issues such as masculinity, female empowerment, sexual and gender stereotypes, etc.

However, as Save the Children points out, education is not only taught and learned in the classroom, highlighting the importance of families and society in general, everyone should be involved in the affective-sexual education of the youngest without taboos or prejudices. We are constantly educating. For this reason, the report includes recommendations addressed to public authorities, adolescents and their families, education and health professionals, and recommendations for society accessible from the organization website.